GRAVES OF FATIMA ('A) 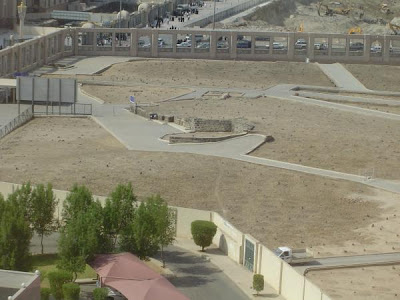 In one of my visits to al-Madina al-Munawwara, when I was honored to visit the graves of the Ahl al-Bayt (peace be upon them) in the well-known cemetery of Jannat al-Baqi, an old woman happen to meet me and asked in the Urdu language: Qubure Fatima kaha hai? (Where are the graves of Fatima?) I immediately thought that her sentence was wrong, and what she meant was qabre Fatima kaha hai (Where is the grave of Fatima?).

Obviously there is a difference of opinion on where she actually has been buried. Is it near the Prophet’s house in the Rawdha (the Aromatic and Paradisal Garden) as some traditions allude, or is it in Jannat al-Baqi’? Until now most of us are oblivious of the actual place. Perhaps, as some scholars opine, Fatima (peace be upon her) intentionally wanted her grave to be unknown, so that the future Muslims are led to question whether it is possible for the grave of the daughter of the noblest Messenger of Allah to be hidden. What do the books of history say? Why did Fatima (peace be upon her) not allow some of the contemporaries of the Holy Prophet (peace be upon him) to participate in her burial ceremony? Why did she prefer to be buried in secret? These are questions history has already answered. Those curious search for the truth.

Why all this disturbance? Is it really because of their concern for the people not to get astray or is it because of a kind of vacuum and jealousy they have been taught to harbor against the Ahl al-Bayt (peace be upon them)? Or is ziyara a catalyst to ignite sparks of revolution and unity of the Umma? These are questions we must try to ponder upon and try to answer.

However, coming back to the question of the old woman, I must say that what she said was not grammatically improper. Yes Fatima does not have one grave. She has several graves: the heart of every lover of Fatima encapsulates Fatima (‘A). However much the kuffar try to spoil, destroy, and insult the edifices of the graves of the Ahl al-Bayt, as long as they reside in the hearts of their lovers, they would remain eternal.
Posted by Muhammad Khalfan (mkhalfan@gmail.com) at 12:35 AM

ENTER THOU IN IT WITH UTTER PEACE & PROTECTION

The Journey to the Beloved is by the Beloved Himself. And the best provision for it is abstaining from what He is displeased with. In Islamic terminology we call that "taqwa". The Holy Qur'an says: "Indeed the best of provisions is taqwa" (2:197)

This is what it is famously known as. It is a short prescription of how to get close to Allah. In it a 94 year old man asks Imam Ja'far bin Muhammad al-Sadiq ('a) about the path to Allah, and the Imam ('a) avails him with an excellent piece of instruction. For more information look at the following blog: http://fridaylantern.blogspot.com/

WELCOME TO OUR TRANSLATION BLOG

CHECK OUR SISTER BLOG "AL-LISAN SCRATCH PAD" for translations of important Islamic texts. We are currently seralizing the translation of the Persian text "Sirat-e-Suluk" a masterpiece of spiritual guidelines. http://lisan-al-qawm.blogspot.com

Soaring to the Only Beloved

Is attention necessary in prayer? How significant is it? Is it possible to maintain attention throughout prayer? What are the factors that can facilitate attention in prayer? How does prayer affect the rest of our actions? These are some questions that the author tries to respond in this short treatise. Read the book online at: al-islam.org/soarbeloved/

MANIFESTATIONS OF THE ALL-MERCIFUL

A Journey towards understanding the depths of a daily supplication of the Holy Month of Ramadhan - A pdf version of the book can be procured from: http://www.al-haqq.com/ihs-iebbooks.html This short treatise discusses the meaning of Divine Invitation in the Holy Month of Ramadhan and the secrets of fasting. A. pdf version of the book can be procured from: http://www.al-haqq.com/ihs-iebbooks.html